A friend remarked to me what a bad shot of luck I’d had, having a child like Felix. Her comment took me by surprise, because  she understands that my love for Felix, and his influence on my life, although at times excruciating, has been overwhelmingly positive. There was no pity in her remark and it did not offend me--it just struck me as funny.  I do not think of Felix as bad luck, though perhaps I might once have.  To say that Felix himself had a shot of bad luck makes more sense.  No one would wish brain damage on their child, and if I could, I would breathe back into life all the white matter that died when he was in my womb. I would give him freedom of movement. I would give him the freedom to speak the thoughts, emotions and observations that animate his mind.  But I cannot, and Felix has figured out other ways of being and communicating.  He has turned out to be as powerful and beloved a personality as any I know. He is growing.  He is learning.  He is making his mark. More times than not, he changes the air in the room for the better.
I bring this up because people have come to me in confusion regarding New York City’s upcoming Disability Pride Parade.  Is it for gay people with disabilities? Well, sure.  But also for straight, asexual, queer, noncommittal, nonaligned. The pride referred to does not refer in this case to gender or sexual identity, but instead the pride of being a person with a disability.  My friend’s comment reminded me that for those steeped in mainstream culture, the very concept seems strange:  why would you be proud that part of you is broken, lopped off, erratic, weird? This makes me start laughing again.

I have my hesitations about identity politics.  We  separate people according to sex, sexuality, race, religion, or (dis)ability, let them squabble over ideas and definitions while those who wield the most power--no matter what their ethnicity, gender or culture--continue to hoard the resources, produce more armaments and gizmos, ransack the earth. Talk about divide and conquer. But here I am now, excited about the Disability Pride Parade, planning Extreme Kids & Crew’s gerryrigged pickup truck float, hoping that you’ll come march with us.

Let me explain. Disability is the most inclusive of identities. It cuts across the lines we commonly use to separate each other: rich, poor, black, white, American, immigrant, man, woman, child.  The 20% of Americans legally considered disabled encompass a wider swath of humanity than the 80% considered “fully functioning.” They are those who see visions and those bound by the literal. They are child prodigies and children locked away in juvenile detention.  They are professors, movie stars, homeless people, veterans, mothers. They are blind, deaf, dyslexic, epileptic, bipolar, amputated. They have Aspergers, ADHD, and Alzheimers. They are all, in some way or another, stigmatized.

The stigma associated with disability may come out in a hushed tone, an averted gaze, or in outright discrimination.   People with disabilities are systematically marginalized, ignored, impoverished, and barred from much of American life. Get yourself into a wheelchair and try taking the subway or seeing high enough to read the names of the politicians on a ballot in a voting booth. Try getting a job with a mention of mental illness on your record.  Trying finding an adequate public school for your child with multiple disabilities.  The one arena in which people with disabilities are overrepresented is in the prison system.  The vast majority of youths in juvenile detention have learning and behavioral disabilities.  Of the entire adult prison population, 40%  has a significant mental illness. About 75% are functionally illiterate, suggesting that a great many of these prisoners have learning disabilities that were never addressed as children.  This is not surprising:  Poor children with dyslexia and ADHD rarely get the help they need.  As a result, they are cut  out from the literate world, denied the possibility of decent work, not given a place at the table.

You may not identify as disabled, yet. You may never identify as disabled. Disabled people, as my daughter Miranda once said, may “freak you out.”  Yet the chances are that at some point, you will be disabled, whether you like it or not.  We are all born disabled, unable to walk or talk, dependent on caregivers to keep us alive.Most of us, too, end up disabled, and a great many of us are confronted with new and strange disabilities  during that great in-between that spans birth and death.  My father’s mother used to rail against sidewalk curb cuts for people with wheelchairs, strollers, walkers. Too much money to help too few people!  It was difficult for her later on when she had emphysema and we had to push her around in a wheelchair. Her path was made so much smoother by those curb cuts, her ability to pee made possible by wheelchair-accessible bathrooms. 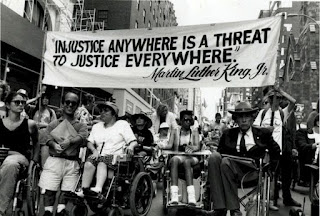 Those curbs and those bathrooms did not appear out of nowhere: they were hard-won victories.  The disability movement has been called the last wave of the civil rights movement, although disability rights activists have been laboring for change since World War I vets returned, expecting to find jobs and rehabilitation after losing their limbs in battle. Over the years the movement has grown to encompass groups representing disabilities of all kinds.  Their work began to pay off in the 1970’s with the Rehabilitation Act--which, for the first time in history, protected the civil rights of people with disabilities by law--and the Education of All Handicapped Children Act, later IDEA--which guaranteed children with disabilities equal access to public education. In 1990 ADA, the Americans with Disabilities Act, was passed, ensuring equal access to employment and public accommodations.  Clearly, enforcement of these laws leaves much to be desired, but they are powerful tools with which to advocate, and should be celebrated.  This year’s Disability Pride Parade honors the 25th anniversary of ADA.

Yesterday, Felix, Miranda, Happy and I went for ice cream cones at the Harvest Market in Greenfield, New Hampshire, down the hill from his school. Felix is too heavy for me to lift out of our car these days--an accessible van is in the works, but the paperwork involved in these things is glacial. So for now, an aide helps me get him in, and there he stays until I can find someone to help me get him out.  At the Harvest Market, the girls sit at a picnic table, while Felix and I stay in the car.  It’s not so bad.  The door slides open, letting in the sunlight and the breeze.  I hold his cone for him and he licks the chocolate ice cream.  I tell him about the Disability Parade and how we’re going to take him to it so he can participate.  He chuckles.  He waves his head in approval. He likes to be in the spotlight.

I am marching for Felix.  But I am also marching for myself.  The touchstone of the disability rights movement is inclusion. I am marching for this ideal, for flexibility and openness, for an understanding of the harm isolation causes. I am envisioning a world where we all have a voice, even if that voice is computer generated, or like Felix’s, mainly wordless. Where real disabled people get to play the roles of disabled people on TV. Where the monoculture of standardized thinking is pollenated by the perspectives and patterns of those who think and perceive the sensory world differently

I am marching for the kind of world that Felix sometimes lets me experience. Walking the streets of Brooklyn with him is different than walking those same streets alone or with my daughters.  Different people recognize us.  Felix’s laughter, his situation, his difficulty melt through barriers of class and culture like a magic wand.  When I am with him, I feel my whiteness less and my class less. I am acknowledged as an equal by high-fiving panhandlers, women in veils, Asian men in dapper suits, homeboys in hoodies. I feel myself recognized as a person far closer to the one I feel inside.  It is a great release. I want more people to experience that kind of altered universe, more moments of unspoken solidarity flaring up on the sidewalk, more understanding of our deep connections to one another.  I am marching to fan the flames of that.

People with disabilities have much to contribute to the larger culture.  They are, by and large, masters of humor, grit, endurance, wiliness, originality, and empathy.  If we give them what our laws decree, all of us will benefit.  This is what inclusion means to me.  Come march with Extreme Kids & Crew and tell me what inclusion means to you.

Contact me at elizafactor@extremekidsandcrew.org if you want to march with Extreme Kids & Crew. I’ll set you up with a tee shirt and further details.  I hope to hear from you!
Posted by eliza factor at 9:51 AM