It started when Miranda, Felix’s younger sister, was about six months old.  She would be strapped to my chest in the Baby Björn, her back to me, her arms and legs jouncing in the beguiling way of a typically developing baby.  Felix, then four, would be in his stroller, whooping or wailing or jingling a jangle, his feet encased in braces, his walker precariously balanced on the handlebars. More than a couple of people, people I had not met before, complimented me on my children and then, after excusing themselves for their presumption, begged me to have another.  They would explain that they grew up with a disabled brother or sister, whom they loved, but who made everything difficult. They would express gratitude for their other, typical, brothers or sisters, who understood the strangeness of their family.  If they didn’t have this other brother or sister, they told me, they had always wished for one.  I did not usually appreciate unasked-for advice, but it was hard to take offense at these people.  They spoke from their own histories, their voices often quavering.

That was my introduction to the passion of siblings, which in the disability world refers to the neurotypical brothers and sisters of people with disabilities. Much has been written about the emotional, physical, and financial strain a child’s disability can cause his or her parents.  Less attention has been paid to the complex and shifting net of emotions experienced by siblings.  This is beginning to change, partly because people with disabilities are living longer, and are more often outliving their parents. Siblings are thus increasingly looked to as the next generation of caregivers.

In 1990, the Sibling Support Project was founded to help connect the millions of brothers and sisters of people with special health, developmental and mental concerns. Perhaps the most well-known initiative of the Sibling Support Project is Sibshops, a peer support program for school-age siblings, which now has 475 groups in eight countries.  Older siblings can connect on SibNet, an online community that counts thousands of members from around the world.  And now Don Meyer, the creator of Sibshops, and Emily Holl, a founding member of sibsNY (a local chapter of the Siblings Leadership Network), have co-edited a handbook intended to help siblings at every juncture of their lives.  The Sibling Survival Guide  addresses issues that come up in childhood, adolescence, and adulthood, including “the g word” (guilt), caregiving and self-care, dating, starting a family, future planning, the end of life, and everything in-between.  The handbook aims to give siblings both practical advice and emotional support.

My friend and collaborator Julia Rothwax--herself a sibling--and I interviewed Emily Holl in December in her cheerful little office at the New York League for Early Learning, a YAI preschool on the West Side Highway in Manhattan.

Entrance into the world of disability:   Peter, my older brother, is diagnosed with Fragile X Syndrome.  I did not realize that he was different when I was young.  He could ride a bike before me.  He could shoot hoops before me.  He was my big brother, my first friend. It wasn’t until I went to the same public school as he, and saw that he was given extra supports, and that the kids teased him, that I understood.   It was a horrible experience.

Your disability: I am terrible with direction: north, south, left, right. . . huh?  I have a tendency to automatically turn right.  Peter could look at a map from the time he was five years old, and could tell exactly where we were.

Recent wonder:  It’s more of a constant wonder.  Over the years, just working at YAI, I’ve seen people get involved at YAI who have no connection with disability.   They haven’t lived with it.  It hasn’t affected someone close to them.  I often wonder why. What enables certain people to have that sense of graciousness, and compassion, and giving?  Why are they the ones who step up and make a difference?  They just get it. Somehow they just get it.

Current project: Why, The Sibling Survival Guide! Which I co-edited with Don Meyer.  All proceeds of the book will go to the Sibling Leadership Network.  For those of you interested in purchasing a copy, the best way to buy the book and simultaneously support the Sibling Support Project (at no extra cost) is to order it through its A-Store http://www.siblingsupport.org/publications/sibling-related-books-and-movies. 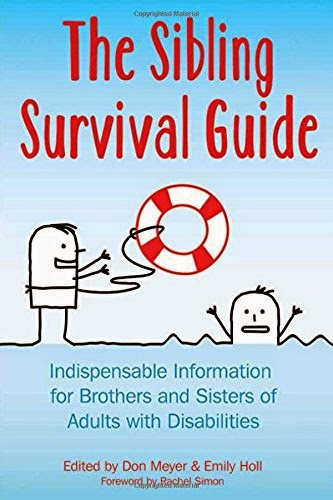 Thanks to Julia Rothwax, who has become my co-interviewer and sound person, you can now listen to Broken & Woken interviews!