If you start a nonprofit and you live in New York City, you will probably find yourself attending your fair share of charity galas. Some are in support of an organization you love. Sometimes you are currying favor.  Always you have the fantasy that you will find yourself chatting with a kind, thoughtful multi-millionaire who grasps the subtle power of your organization and is eager to help.

From time to time I buy tickets to these galas.  Sometimes they are given to me.  Occasionally Jason gets me into galas that would normally not be on my radar.  So it was last week.  Jason was asked to a black-tie dinner-dance at the Grand Hyatt, hosted by a consortium of New York real estate and construction interests.  Tables cost from $7,500 to $50,000, and the proceeds were to go to a charity called National Jewish Health.

We arrived late, as I had been trying to get a stain out of Jason’s tuxedo shirt, which may not have been laundered since college.  Cocktail hour was in full swing.  We mingled with the crowd, trying to fit in, observing their behavior.  One of Jason’s colleagues greeted a real estate mogul by saying, “The last time we met, you told me to go fuck myself.”  No offense was taken.  Someone pounded on a xylophone.  We were herded towards the elevators like a group of well-dressed cattle.

The last time I’d been to the Grand Hyatt had been for the Brooklyn Community Services gala, an affair that featured earnest speeches about poverty in Brooklyn, radishes done up as flowers, and Mayor Dinkins.  I expected more or less the same thing, if from a different political slant: Larry Silverstein instead of David Dinkins.  Health instead of poverty.  Kosher instead of crustacean.

That’s not exactly what I got.  The elevator doors opened to a corporate Hyatt hallway, resounding with music as warped and insistent as the bass from a muscle car. We wondered if we were on the wrong floor, but we were caught in a sea of dinner-dance guests, most of whom looked as bemused as we felt.  Dotted around the hallway were Lycra-clad dancers vamping on platforms, their faces painted with glitter, their scalps topped with shag carpet wigs in yellow and orange.  A guy in a darkly mirrored body suit jumped around a fake manhole in a vaguely sinister manner.  Silver spray paint on black banners proclaimed Anarchy! Chaos! Lunacy!  Could this scene possibly be self-referential? An acknowledgement of the disruption that can be caused by development? No. We entered the ballroom, disco balls everywhere, strobe lights flashing, women dancing in cages. Jason saw my face.

“Relax,” he shouted over the beat.  “You are supposed to think Studio 54.”

Fuck Studio 54. I don’t like seeing men behind bars, either.  We found our table near the back, decorated with a heap of silver and black disco paraphernalia, plates with thinly sliced beets, and sardine tins stuffed with lobster salad.  So much for kosher.  Apparently, National Jewish Health was Reform.

I felt like an extra in American Hustle, but this was real.  Seventy or so tables were arranged around the room, around each of which sat real guys from the construction industry, with real wives in sequins, eating real lobster salad.

At least the lobster salad was good.  And I got to sit next to a friend from Jason’s firm.  Only a third of the people there were in construction, he told me. The rest were in real estate and law.  No one wants to go to these things, he explained. You just do. It’s the price of doing business. Their law firm had coughed up $10,000 or $15,000 for the table.  Not enough, apparently; their name was misspelled in the brochure.

Up at the podium, Mr. Silverstein, whose company owns the World Trade Center, thanked person after person.  He was followed by the organizer of the gala, and then a representative from National Jewish Health, which we discovered was a hospital.  In Denver.  It had been founded in 1899 to serve the poor.  Now it is a world-class institution specializing in asthma and other inflammatory diseases.  We watched a five minute movie demonstrating how the hospital had cleared a child of disfiguring eczema, how it had helped a firefighter with a puzzling respiratory ailment breathe again, and how it had helped a middle-aged woman with acute asthma live a life outside of respirators.  I have asthma.  I understand the visceral joy of lungs opening up, allowing oxygen in.  I’m grateful for any institution that’s trying to make breathing easier.  But it was hard to breathe in that ballroom. 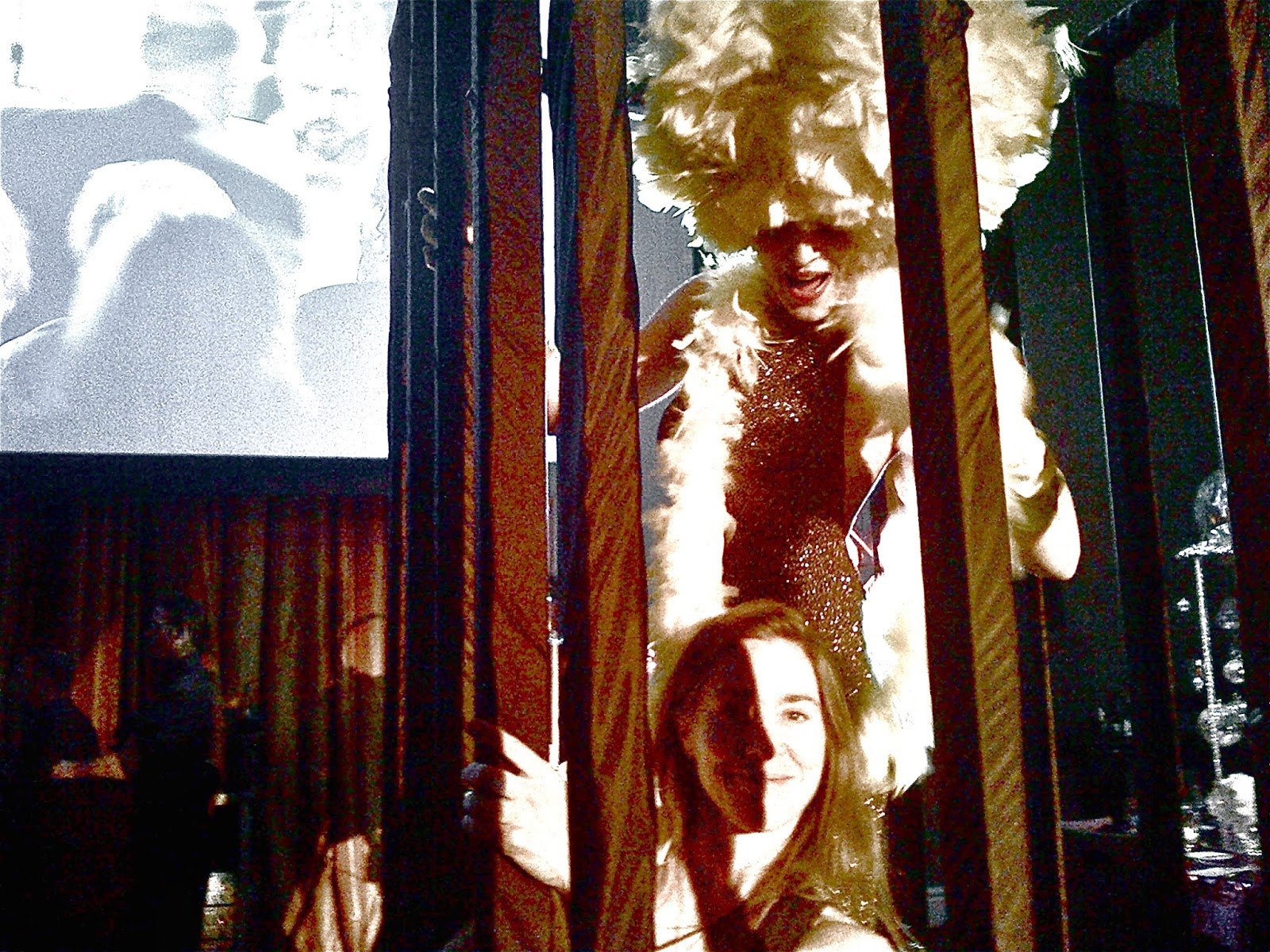 The band began to play.  I will survive.  People got up to dance.  I was surprised.  It’s hard to get people to dance.  Then again, the dance floor was filled with young people in Lycra and rhinestones, paid to shimmy and smile.  And they were handing out glowing rubber rings and flashing plastic necklaces, which the crowd eagerly snatched up. The party painter, behind his easel, captured the scene in oil. He couldn’t tell me how much he was getting paid, he said, but he’d charged less, due to it being a charity event.

What if Extreme Kids lasts 100 years? Will our funding streams resemble those of National Jewish Health? It’s already happened on a smaller scale.  A couple of years ago, the Aqueduct Racetrack tossed us some change.  We were grateful for it.

Outside the hotel, Santa Clauses taking part in Santa Con stumbled about drunkenly.  We saw an empty cab and grabbed it.  The cabbie was a young man with delicate features and a shaggy blond beard.  “Fort Greene,” Jason said.   The cabbie giggled, his voice high and piping, shot through with tremors.  Jason and I put on our seatbelts.  The cabbie kept giggling, his thin shoulders trembling.  But his tremors seemed to be contained in his shoulders and his voice.  He drove with a steady hand, and spoke with an openness and sweetness that made me think he might be on the spectrum.  My lungs opened up.  There was that oxygen that had been missing during the gala. We talked about Fredericksburg, Virginia, where he’d grown up and where I’d gone to state fairs as a kid.  He’d moved to New York, drawn by the art, and now was driving a cab six days a week, and sending $300 a week back to a woman he’d married in India.  It had been a mistake, he said, marrying her. He drove us across the Manhattan Bridge, musing about a friend from Sudan, and the possibility of reinstating peace after the civil war.  He drove us down Myrtle, remarking that he had picked us up by the statue of Cornelius Vanderbilt, and that now we were approaching Vanderbilt Avenue.

Jason gave him a big tip, though he doubted the cabbie would be able to keep it for very long before someone took it away from him. Which was funny, because I’d been thinking: God, I wish he was a millionaire.  He’d fund Extreme Kids & Crew.

Back at home, Jason made me guess the contents of the swag bag that we’d picked up as we left the Hyatt.  “Lotion,” I said. I was wrong, again.  Inside: socks decorated with a marijuana motif, presumably a reference to the pot-happy laws in National Jewish Health’s home state.  Plastic martini glasses.  And finally, something useful: a lava lamp!  A sensory treasure for Extreme Kids & Crew.

Then inspiration hit.   I packed the lamp and the rest of the swag back in the silver sequined bag from which it came. I’m auctioning it off.  Come on guys! Make me an offer worth my while.  I’m starting the bidding at $100. But if you happen to be a billionaire with ties to National Health, we’d take a cool million for the lava lamp alone. 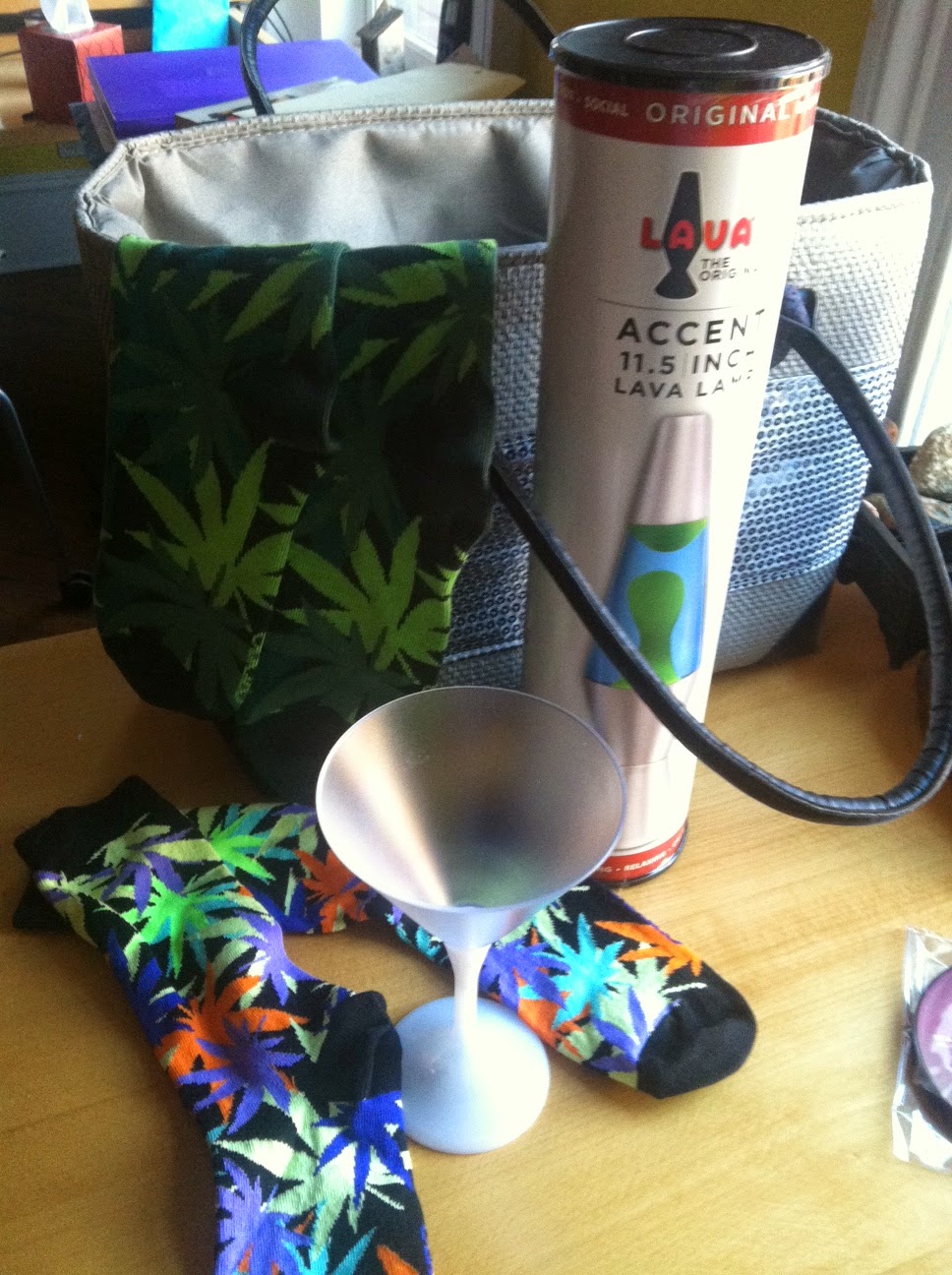