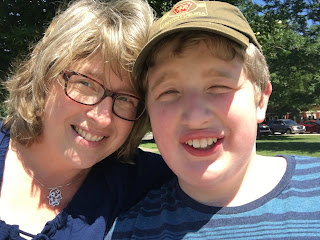 5:30 am.  I hear a familiar squeaking hinge and heavy uneven footfall.  Martin's up.  I wait for him to show up in our bedroom doorway, knowing that even if he doesn't appear, I'll have to get up and figure out what he is doing.

5:45 am. Back in bed. Maybe Martin will go back to sleep. Probably not. He was sitting on the toilet when I got up to look for him, but he didn’t have to go and seemed disoriented but fully awake. I told him to “rest” in his room “for a while.” Maybe he’ll play with his wooden trains. It’s happened before.

6:28 am. Thudding steps in the hallway. I’m up. “It’s not time to get up yet,” I try, guiding him back to his room. I stumble back to bed, glowering now. How does Jeff sleep through this, I think, not for the first time, as I nod off again.

7:15 am. Squeak. Thud. THUD. OK, enough. Martin is standing in the doorway. “Shower,” he says. I guess I’m up. “OK. Shower,” I say. I stretch out on my back and squeeze my eyes shut. I will savor every moment in this bed while I can. I hear the shower turn on. He’ll relish the hot water and steam for at least five minutes, I think, pulling the sheet up under my chin. After that, who knows? He’s been known to splash water all over the ceiling and walls or to squeeze gobs of shampoo and conditioner on the tiles, making a slippery, hazardous mess for the next person who stumbles in there not fully awake. Like his brother, who I am now picturing unconscious on the bathroom floor, having slipped on an invisible slick of Pantene. Shit. I’m up.

7:30 am. “OK, Martin, turn off the water,” I say. I am holding open his big red bath sheet, just like I always do. He complies, and I wait a moment before opening the shower door, watching him as he stands quietly in the warm fog. Then I open the door. He starts to script something under his breath as I tousle his wet head and wrap him in the towel. I can’t quite make out the words, but the volume gradually increases until the last syllable, which he shouts. Loudly.

“Martin!” I scold, but before I have a chance to give him a directive, he is mumbling something again. Something very similar, getting louder and louder and then, he screams. A sustained, ear-splitting shriek.

“Quiet voice, Martin,” I say sharply, “Keep your voice—” [Scream] “Martin, you must stop.” I usher him as quickly as I can out of the bathroom, through the bedroom [Scream], down the hall, and into his room. “Martin,” I say, trying to get his attention, “Martin, look at me.” I point to my nose to direct his attention to my face. Usually he points to his own nose, gives me a fleeting glance, listens. Now he looks past me, continuing the tape loop, something about Mater and the Ghost Light, then [Scream].

“No YouTube!” I announce, playing the only card in my deck, the one incentive that has always worked. The promise of YouTube motivates Martin to comply with almost any request, even hours in advance. He pauses. “YouTube!” he demands. “Yes,” I reply, “First no screaming. Then You—” [Scream]. “Martin!” He does not register what I’m saying. His whole body is caught in the loop of a script he seems compelled to repeat. He turns slightly away, steps forward, nods, mumbles about Mater and the Ghost Light. [Scream]. This time he holds the shriek, his whole face going red and taut with the effort.

I grasp for a behavior strategy. In the 10 years since Martin’s autism diagnosis, the primary support we’ve received has been from behavioral specialists and special educators. No one can tell us why Martin stims and scripts, why he cannot tell us how he feels, why he can never explain why. We use visual schedules and positive reinforcement and simple directives to motivate him without ever fully understanding what he is thinking. “Martin,” I say, “Try to scream in a whisper.” I model this for him, then say, “You try.” He does. He tries it. I am praising him when [Scream]. “You must stop,” I say. “Mommy is sad,” I say. “You have lost YouTube,” I say. “YouTube!” he pleads [Scream].

8:45 am. We are in the kitchen. Martin has screamed through breakfast. He is pacing and mumbling and shrieking. Jeff and the older kids must be awake. Are they hiding? I can figure this out. I must figure this out. Martin is not responding to my stern voice. I am pleading now. He stares out, repeating his mumbled phrase, punctuating it with shriek after shriek. It looks like a compulsion, but is it? What does a seizure look like? What if he’s been having seizures for years? What doctor should I call?

9:15 am. Redirection. I try setting him up with MarioKart on the Wii. He is playing and mumbling and talking about Mater and screaming. I expect his voice can be heard outside. In a week we are leaving for our annual vacation, where we stay in an old cottage nestled among others near Lake Michigan [Scream]. We already get the side-eye from the cottagers there. I imagine someone hearing what I am hearing and calling the police to report child abuse. What if we can’t go to the lake anymore? Never mind that. What about today, tomorrow, every day? I can’t take him in public like this. What if he can’t go to school in the fall?

10:00 am. I am sitting in the dining room staring at the pieces of a puzzle I spread out on the table in an effort to distract myself. Martin is shrieking like clockwork in the kitchen, having abandoned the calculator and math homework page I offered in a last-ditch attempt at redirection. I hear Jeff on the stairs. He is calm. This makes me unaccountably angry. I want to talk to him, to figure this out with him, but by now Martin’s shrieks feel like blows. I can’t think straight. I keep getting up, yelling at Martin, telling him he must stop, there’s no more YouTube for you, stop, stop, STOP. Jeff quietly suggests that we should ignore the screams altogether. The more we call attention to them, he says, the harder it will be for Martin to stop fixating on the script. Jeff is right, but my ego is bruised. And I’m still mad. I pout over my puzzle pieces [Scream] and imagine that this is my life now. Martin walks into the room. “YouTube?” he asks, desperate. Then he mumbles. Then he screams. “Go away from Mommy,” I say. “Go talk to Dad.” He doesn’t want to walk away. He needs me to reassure him about YouTube [Scream]. I do not do this.

10:30 am. Jeff thinks I should get out of the house. “You need a break from this,” he says, “I’ll take over for a while.” Martin has moved into the living room. He is playing the Wii again, screaming every few minutes. Jeff and I talk in the kitchen, but all I can hear are the shrieks. I’m starting to brace for them now. Jeff does not look worried. He looks ready to spell me—this has been our approach to parenting Martin since his diagnosis. We have been spelling each other through every stage, taking turns immersing ourselves in Martin’s obsessive behaviors, monitoring him in public places, negotiating his outbursts and silences, treating the world to what we like to call Autism Performance Art. [Scream].

10:45 am. It helps to talk to Jeff. I focus on our conversation, willing myself to stay calm, puzzle this thing out with him. Then I hear Martin. “That’s better,” he says, “try marching.” We find him stomping across the living room floor; instead of screaming, he punctuates his script by slamming his feet against the rug with all the force he can muster. “That’s it,” he says, “Works every time!” He stomps again, and this time a picture frame slides off a side table. I eye the TV we recently mounted on the wall and wonder. Then I praise Martin. “What a good idea,” I say, “but marching might break something. Let’s try something else.” He moves to the recliner nearby, sits, mumbles his script. Then he slams his forearms against the upholstered arms of the chair, hard, over and over until the urge passes. “Whew,” he says, “That’s it.”

By the time I leave for the grocery store, Martin is quiet, only periodically slamming his arms against the pillows we’ve wedged between him and the chair. I am still worried. I think Jeff and I are anxious people who have passed on our broken brains, in one way or another, to each of our children. I think I am uniquely ill-suited for this job. I think it’s my fault. My thoughts are a persistent looping tangle. But at the same time, I wonder whether, even as he screamed, Martin listened to us talking in the kitchen, whether he, too, was puzzling things out, finding his own way around this new compulsion.

11:10 am. Sitting at a red light. I tell myself to focus on the positive. Maybe Martin understood our frustration. Maybe he was frustrated, too. At any rate he figured out a way to stop screaming on his own. I’m certain this won’t be the last episode, though. Will he be screaming when I get home? As encouraging as it is to know he can self-regulate, it would be better to understand why he started screaming in the first place. Why is the question I want an answer to—not just why is he suddenly unable to stop screaming? but why does his brain work the way it does? I think that if I could just understand why, if I could just understand, everything would be OK.


Inhale. Exhale. I will not understand this today or tomorrow or any time soon. I think about my grocery list and how I really should write it down and stop relying on my memory to fill the cart every week. I think about what I will make for dinner. I wonder whether Martin will try salmon again. The morning fades and I think, Jeff is there with Martin. I can worry over screaming and behavior strategies and worst-case scenarios later. I hear honking behind me. The light is green. I drive on.

Nancy Quick Langer was born and raised in Pittsburgh, and except for the two years she spent in graduate school in Boston, the farthest she has traveled from home is through the Ft. Pitt tunnels to the suburbs south of Pittsburgh.  She is a writer and works as an English writing teacher at Duquesne University and Carlow University. She and her husband Jeff have been married for 23 years and have three children: Bea, Henry, and Martin. Nancy recently published a series of essays about Martin’s Bar Mitzvah journey in her blog not a man of words.

Email ThisBlogThis!Share to TwitterShare to FacebookShare to Pinterest
Labels: Nancy Quick Langer, Not a Man of Words