Ashes on the Tongue

Felix has been to a few demonstrations, most recently the Disability Pride Parade in New York City. While I am proud of him, he did not show any great pleasure at being stuck in a car for five hours as we drove from his school in New Hampshire only to be wheeled through the sweltering streets of Manhattan in July. He scowled most of the time, and his vocalizations veered towards the screechy and annoyed. So even if pandemic precautions had not prohibited it, I would not have taken him to the Black Lives Matter protest in our little town in New Hampshire.  That was for my daughters and me.  As a healthy white mother and as a student of history, I felt that I had no choice but to be there.

My first teacher was black. His name was Gordon. He scooped me up and whisked me to safety when a classmate was angrily grinding sand into my scalp.  She was black, too. It is possible I was staring at her skin, and it is possible that's what enraged her. I hadn’t realized the variety of color people’s skin could come in.  All my family members were white, and we lived in an all-white neighborhood in Cambridge, Massachusetts.  That preschool was my first taste of anything approaching diversity.  Established in response to the Boston busing riots, it was a cheerful place of finger paints, building blocks, and daily naps, with a student body carefully culled from families who were half black, half white, half working class, half middle class. As an incubator for raising people committed to inclusion, it worked, at least on me. I have felt a distance from and discomfort in groups that are one class or one color ever since.

Gordon had a gentle laugh, didn’t mind my shyness, and was my source of comfort and safety.  I loved him and have often wondered if his influence protected me from the fear of black men that social scientists tell us exists in the white heart.  Speaking for myself,  when I was of an age to feel frightened of boys, the white ones scared me most.  I had not yet studied American racism, yet my body must have known that while black boys might annoy me, they wouldn’t risk seriously hurting me.  White boys, on the other hand?  There was little holding them back.  They could do what they wanted, and still get appointed to the Supreme Court.

I am writing about my somatic experience of racism because Toni Morrison called out white writers for not exploring this territory.  I cannot speak for anyone besides myself here, but I feel it as a curdling fury, a disgust with property and possession, a desire to cast off everything I own and wander around in sackcloth.  I recognize this as a desire for purity, a wish to detach myself from my country’s history and cultural legacy, to cleanse myself from sins that the entire nation has been steeped in for generations. My family stretches back to those first boatloads of white people.  We’ve got genocide, stolen land, the slave trade, Jim Crow, redlining, mass incarceration, and more on our conscience. None of this cuts down on my lifespan, lands me in jail, robs me of my children, but it weighs and sours.  It's a poison that gives power, ashes on the tongue.

“History does not refer merely, or even principally, to the past.  On the contrary, the great force of history comes from the fact that we carry it within us, are unconsciously controlled by it in many ways, and history is literally present in all that we do.  It could scarcely be otherwise, since it is to history that we owe our frames of reference, our identities, and our aspirations. “ James Baldwin, Ebony Magazine 1965.

This weight lightens when I am with Felix.  At this point he is seventeen and remains as unimpressed as ever by manners, customs, laws, and expectations.  He may be the person most immune to racism I’ve ever met. Certainly he attracts people of all colors and creeds, and responds to them with a directness untainted by history or culture.  I have written about the joy of wheeling him around the streets of New York City, witnessing and joining in moments of connection with people from all walks of life.  That experience was a big reason behind Extreme Kids & Crew. I was curious: Could his ability to break down color and class barriers go beyond him? Could the disabilities of our children help dissolve some of our racism?  In some ways, yes: The atmosphere at Extreme Kids & Crew is generally loving, open and integrated. The bolts of energy I felt walking the streets with Felix zing around our ballpit, too.  Parents of all backgrounds and from all parts of the city tell me how good it makes them feel.  I recognize there may be pains and slights that they are not telling me about. I am white. I am the founder. I hope we can use this moment to break through some of this hesitation, to locate and defuse our own biases, to build trust as a community, to become better.

We are at a pivotal moment in history.  The devastating effects of Covid, so disproportionally felt in black communities, a white supremicist President and gut-wrenching evidence of police brutality have exposed the depths of American racism to those who do not usually feel its weight. The resulting protests are encouraging.  People risking Covid to march in the streets, day after day, week after week in major American cities and small ones, too.  My aunt told me that in Boulder, Utah, with a population of around 200 white people, 100 demonstrated in solidarity with Black Lives Matter.  Solidarity marches around the world. This activity is having an effect: in New York, the repeal of 50-a means that law enforcement agencies will no longer be able to shield police misconduct records from the public, and the defund the police movement to redirect resources to community services is gaining ground around the country.  These are real changes, real causes for celebration.  We need to keep moving in this direction.

At Extreme Kids, we can find ways to shine a light on how structural racism affects disability. For example, white children are more likely to be diagnosed with autism or ADHD, whereas black children are too often labeled with “disruptive behavior disorder” and put on the path to segregated classrooms, juvenile detention, and jail. According to Erin McCauley, a doctoral student at Cornell University, more than half of black people with disabilities will be arrested by the time they reach their late twenties.  Lawyers, special education educators and parents have been fighting this for years.  Now is the time to escalate. We can do this.  Look at those kids organizing peaceful protests day after day.  Look at Ella Jones, who will be Ferguson, Missouri’s first black mayor, and likely would not have been elected without Black Lives Matter protests of the killing of Michael Brown.  Look way back to my preschool, the kind, warm arms of Gordon. Almost fifty years later, his influence continues.  Each thing we do, each letter, each march, each vote, each donation, each conversation, each hug (when we are allowed to hug again) each stretch of the imagination and understanding, all add up to change.  What we do matters. 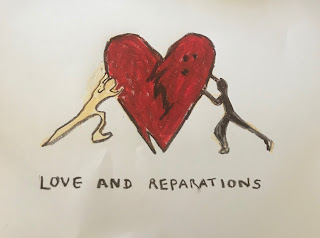 Here's the sign we brought to our local Black Lives Matter protest. Let's talk and share together. Send us your and your kids artwork and ideas about how we build a better world for all of us.
Posted by eliza factor at 9:04 AM