The Thing About Staring 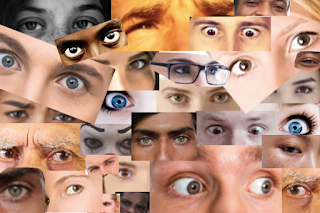 "Don't stare!"
"Stop staring!"
"Staring is rude!"
We virtually all agree that staring is a no-no, but I have a question: what should we do instead?
I fear that the other side of staring is ignoring, and that makes people invisible.
I've been on both sides of staring: as the double-take speed-starer when surprised by what's in front of me and as the staree when I was bald from chemo.
I only minded some of the stares: the ones that seemed judgmental. (Was I reading the starers' minds/faces correctly? Who knows?) There was a young girl who stared at me, openly, frankly, curiously, in the lobby of a restaurant. I said hello to her and she said hello back and that was that.
Of course, it's rarely that simple.
Before proceeding, I need to mention that I'm someone who doesn't avoid eye contact and who says hello or smiles when it occurs. It's a habit that I picked up when I lived in San Diego and that I chose to retain when I returned to New York City. I've learned that many people crave interactions, however brief. They're glad to smile back. Sometimes wonderful conversations ensue.
Some stare-related/double-take-related anecdotes:
And this is where we get back to "what do we do instead?" I don't think every double-take can be eliminated; they happen before our decision-making mind is engaged. We can decide to then not look, and I think that's mostly what people do, but is that really an answer? On the other hand, how can you treat people as just people when your first response announced that you were shocked or surprised by them?
I don't have an answer to this question. I wish I did. 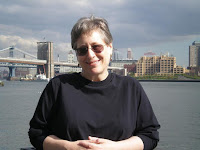 Wendy Caster is an award-winning writer.  She lives in New York City.