This holiday season, Broken & Woken gives you the gift of Kali Evans's drawings. Kali is another of Extreme Kids's amazing crew of artists.  It was difficult choosing which of her pieces to put first, but I figure that we can all use a rescue trombone.  Enjoy! 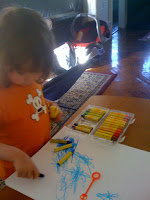 A bio of the artist, by her mother:  My daughter Kali is a fearless, joyful, outgoing kid. She’s also 10 years old and autistic. From the moment she could use a pencil (which was later than most kids), Kali would draw constantly. She started out by making patterns of scribbled “blobs.” Within a few months, these shapes evolved into drawings of insects, pirates, her favorite moments from Yo Gabba Gabba, and animals. By the time she turned 5, Kali would go through a composition book a week, and would literally draw herself to sleep: some mornings, I would find her asleep in bed with a pen in her hand and ink on her cheeks.

These days, Kali still loves to draw animals and mythical creatures, and has expanded her range to include different formats and media. She makes comic books about tv shows on Alaksey, her personal network; designs fictional “missing animal” fliers; and loves watching animal face painting tutorials on YouTube and practicing on herself. Art helped Kali communicate with the world, and is now an essential part of her spirit.