Grandfather and Grandson: A Tale of Two Disabilities


Every year, my family visited my parents at their home in Sarasota, Florida. We all liked to spend time in the pool. My daughter, Fiona, had a special bond with my mother, and they always ended up somewhere giggling together. My husband, Michael, and I enjoyed the warm-weather escape from New York City, relaxing with something to read. And my son, Quentin, usually spent the majority of his time quickly flipping through channels on the TV.

This is a coping method for him. Quentin has autism and ADHD, and flipping channels was a way for him to deal with the fact that we were not in our regular routine. He always has a hard time when we travel somewhere that disrupts his routines and takes him out of his usual surroundings, including visits to my parents’ home. I think Quentin wanted to see the station logos at the bottom of the screen as each channel was changed. He loved the repetition, and seeing the logos brought him a relative calm: They were the same one we have on our cable system back home.

While it took me a while to understand Quentin and his behaviors, my father merely grumbled. He always thought Quentin was simply misbehaving. He didn’t understand the coping part. Yet if we took the remote away or tried to prevent Quentin from channel switching, he’d have a meltdown. He would kick and scream and start to destroy things. So, I’d give him the remote and let him be. My father disliked this, and our disagreements about parenting always made the trip difficult.

My father never really tried to understand Quentin. He disapproved of every strange thing he did – and believe me, Quentin did some pretty strange stuff. Quentin licked things like glass panels or coins, touched (and nearly broke) every fragile item in their home, and liked to jump into pools, even when fully clothed. My father once told me I was spoiling him by giving in to his tantrums.

The funny thing is, my father also had a disability. His left arm was deformed – curved into a crook. His left leg muscles made him walk funny. He was born with physical deformities in the 1930’s, when no one labelled them with a diagnosis or condition; they were what they were. Through the modern-day powers of the internet, I learned that my father likely had Erb’s palsy, but we just called it “Dad’s handicap.” There was no physical therapy or medical help for this kind of condition when Dad was a boy; his mother simply did what she could to help him.

My father grew up unable to play with the other boys in the ballparks and playgrounds of Brooklyn. He became skilled, though, at flirting with the girls who watched the games with him on the sidelines. Still, he needed help throughout his life. He needed help cutting his food, even as an adult. He couldn’t tie his shoes, so he wore loafers. And while he loved chemistry in high school, his teacher told him he couldn’t become a chemist without two good hands. So he followed his second-favorite passion: statistics.

When I was growing up, we never talked about his arm, but not because Dad was ashamed of himself. There was simply nothing to say. He could hug me with one good arm. What else mattered? Occasionally, he’d say he felt bad he couldn’t play catch with us like other fathers, but that never made me feel like I was missing anything.
Quentin was born in 2007, also in Brooklyn, along with his neurotypical twin, Fiona. Just as my grandmother had to learn how to adapt for my father, so I have had to learn to adapt for Quentin.

Like my father, Quentin has difficulty playing ball or on the playground with other kids. We got stares or complaints if Quentin took someone’s toy away or did something to upset another child. I was lucky to have found Extreme Kids & Crew before he got too big to cause too much trouble. I loved coming to Extreme Kids because I could celebrate both of my children without stares or judgment. I could compare notes on therapies and schools with other parents. I wonder, sometimes, if my grandmother ever felt as lonely as I did.

My parents came to visit just as Extreme Kids was beginning to take shape. I was eager to show them this community I’d found. They sat on folding chairs and watched the kids play. I remember my father eyeing one boy who had severe physical disabilities. I knew my Dad was thinking of his own disabilities; I could see it in his eyes. Later, he said to me, “I wish I had a place like this when I was a kid.” I wish he had, too.

Last summer, my father died at the age of 85. In retirement, he spent half the year in the Berkshires in Massachusetts and the other half in Sarasota. In both places, he pursued his favorite hobbies: bridge and going to the theater. He and my mother traveled the world and visited his many friends. He was having a fantastic retirement -- the kind we would all hope for. He had come a long way from being that kid who couldn’t play ball or become a chemist.

The last time my kids saw my Dad, we were in Sarasota during spring break. He took me aside the day we landed and quietly said, “I really want to try to connect to Quentin. How can I do that?”

The question choked me up a bit. For all his years of lacking sympathy, my father was finally opening up and accepting Quentin for who he is. I told him to sit quietly next to Quentin and engage him in his own world: If he’s watching TV, watch with him. If he’s reading a book, read with him. Comment and point like he does.

My father tried. It wasn’t the biggest connection by any means, but Quentin sat with him for a bit. Dad watched as Quentin flipped channels. He sat close and occasionally remarked on a logo. This image is imprinted on my brain. This simple act of trying to interact with Quentin on his level, to forge a difficult relationship: this is the greatest gift he ever gave me.  This simple act showed acceptance and love.

We are not all alike. We come together at spaces like Extreme Kids & Crew to celebrate  our differences, no matter what. It’s hard. The differences might be difficult to get past, but we must try. Just because my father had a disability didn’t mean he immediately understood my son’s. But his attempt at acceptance and understanding – after a long period of not wanting to try – is exemplary. 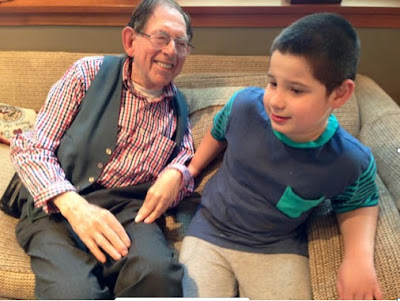 Dr. Melissa Morgenlander is a children's media curriculum designer, researcher, and writer. She works with a variety of educational television shows, apps, and after-school programs. She also writes about the intersection of autism and media and technology on her blog, the iQ Journals.  Learn more about Melissa’s professional experiences from her website.