The 2017 Felix Awards Go to Steve Silberman and Liana Finck

Ever since Felix was born, I’ve been dogged by the word disability, unable to come up with a decent definition. The more I think about it, the more universal it becomes, and the more I fall back on my suspicion that disability is simply the condition of being human, or maybe mammalian, or maybe just alive. The conventional view is less broad. Legal language tells us that disabilities are conditions that hamper essential “life activities” like working, talking, seeing, driving, taking a test, getting a date. My not being able to find my keys, whistle, think in a straight line, or remember my neighbor’s name may impede my life activities, but they don't weigh them down unduly. Therefore, I am not disabled. It's a question of degree. I understand that I’m not as disabled as my son, who needs other people and equipment to help him get from one place to another, and who cannot converse in conventional language. But where do we draw the line between cumbersome and crippling—and why do we insist on drawing this line?

Liana Finck plays with these sorts of questions in her New Yorker cartoons and the marvelous charts, drawings, and questions that animate her Instagram feed. Take “Superman and Unexceptional Bird.” It’s the “unexceptional” that makes this picture so funny, and gets my mind churning. I wonder: If you were born with the ability to fly, and if you regularly fluttered up to the ceiling, annoying your teachers and parents, would your wings be deemed a cool super-ability, or part of a larger disability? 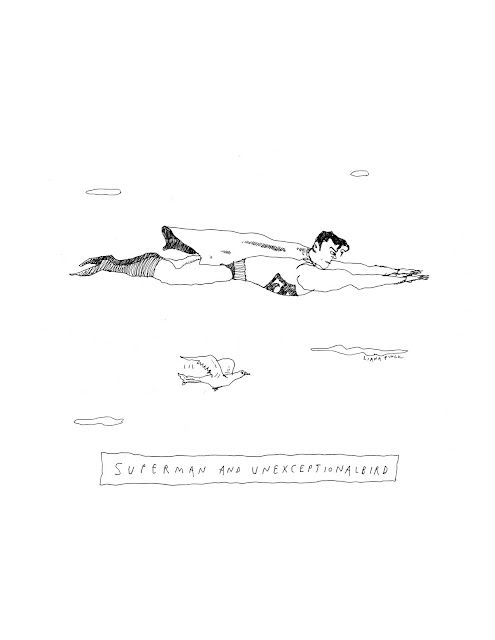 Finck's work provides excellent, amusing tools for writing and thinking about the boundaries of weird and normal, and the conundrums of such divisions, as in this analysis of acceptable out-of-the-box-ness. Where do you fit into this chart? And which you? You as a son or daughter, as a juggler, as an essay writer, as an eater of macaroni? Recently, my 10-year-old daughter worried that her laughter sounded weird. Is she a quirky laugher, or an unfortunately outré one? Is there such a thing as “in the box” laughter?

Liana also explores with great tenderness that feeling of not knowing where you stand, but having a feeling you need to stand somewhere--the loneliness and uncertainty of being caught between this and that. 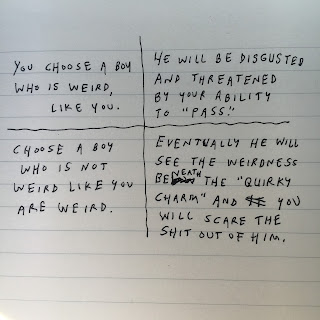 At Extreme Kids, we don’t concern ourselves much with diagnoses, partly because they can be arbitrary or socially determined. These days, for example, the wealthier you are, the more likely your child will get an autism spectrum diagnosis, and with it, greater chances of receiving services, support, and increased public understanding. The poorer you are, the more likely your child will be labeled emotionally or behaviorally impaired, or even shipped off to JV. But even if diagnoses were more of an exact science, and more justly acquired, we at Extreme Kids would not lean on them too heavily, for our desire is simply to bring together people who do not fit the mainstream mold. No matter what their diagnosis may be, we know of one way that we can help them all: accepting their difference and trying to figure out how to learn from and connect to it.

In his celebrated book Neurotribes, Steve Silberman has delved deeply into the shifting meaning of and history of one such diagnosis: autism.  In so doing, he provides much-needed evidence that autism isn't a new phenomenon, but has been observed over centuries by researchers in many countries--notably, Hans Asperger, who lived and worked in Vienna in the 1930s. Reading about the Children’s Clinic where Asperger worked is like reading about the sort of school many parents seek for their children today: a place of inquiry guided by openness, encouragement, and attentiveness to each student’s individual personalities and passions. 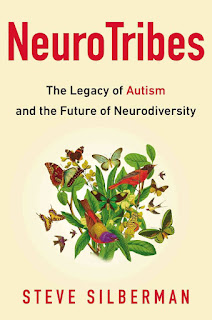 Asperger and his colleagues understood autism to be a cluster of traits, including social awkwardness; a fixation on rules, laws, and schedules; difficulty with basic life skills like dressing, bathing, or proper table manners. These traits were shared by a variety of individuals, some precocious in the arts and sciences, others so hampered that they could not speak. Asperger didn't sugarcoat autism, but he also didn't view it as a deficit. Instead, he saw it as a type of intelligence. He once said, “for success in science and art, a dash of autism is essential.” This is because people with autism are often unaffected by conventional thinking, and approach subjects with a freshness and originality that eclipses those who are more bound by social mores. Asperger’s work was cast into shadows by the depravities of World War II and the professional rivalry of Leo Kanner, who viewed autism in a far more narrow and negative light.

Silberman’s expositions of the personalities and backgrounds of the people who tussled and strategized over the definition of autism, and their place in medical history, is a clarifying reminder of all the “not science” that goes into science, and the punitive and political uses to which medical science has been put—from institutions for “Insane Indians,” where rebellious Native people were kept in chains, to the claims of eugenics, variations of which we still struggle with today, to the psychological damage wrought by clinicians like Bruno Bettleheim, who popularized Kanner’s brand of autism in bestselling books and articles that considered autism a “suicide of the soul” caused by loveless parents.

On a practical note, Silberman’s book explains the bureaucratic and pragmatic reasons behind the rising numbers of children diagnosed with autism today, breaking down some of the fear and misunderstanding caused by these numbers. If you haven’t seen his TED Talk on the subject, do!

Both Liana Finck and Steve Silberman are wonderfully deserving of a Felix Award, and I am looking forward to meeting them on May 25 at Extreme Kids & Crew's annual benefit.  If you are in the New York City area, you can too! There’s no ticket. You just have to donate to Extreme Kids & Crew’s Build to the Bronx Spring Campaign.  Once you do, you will be automatically invited to the Felix Awards. Ours is not a rubber chicken gala--it's a night of dancing, celebrating, and thinking about what makes us different and the same.  I am proud to add that it has been dubbed Extreme Fun by Vanity Fair’s Agenda!

Even if you can’t come, please consider donating to our campaign—all money goes to creating and maintaining safe, creative, flexible playspaces, where families with kids with all sorts of disabilities congregate, explore, and celebrate themselves, together.
Posted by eliza factor at 8:11 AM