I started running early last year, initially to try to take off some weight. I was heavy, stressed and tired, and I figured that if I gave myself the goal of a race—a half marathon, no less--I would have something to keep me motivated. I signed up for the Brooklyn Half and started a novice training program.

I have reached a point in my life where I‘ve more or less figured out the things that I'm good at, and have gotten pretty adept at avoiding the stuff that’s harder for me. That said, I've never been particularly athletic, and the training program, novice though it was, proved a challenge. I had a lot of doubts and struggled with the fact that the running wasn't coming easily for me. I was red-faced, sweaty and slow in what seemed to be a park filled with dewy gazelles.  But I kept it up and soon realized an unexpected bonus to running: quiet time alone to think.

On my runs, my thoughts often turned to my boys, and especially Silas. Silas is Autistic, and has a hard time 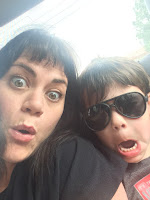 with verbal communication. He is very expressive, but getting words out isn't easy for him, and on some days is pretty much impossible. More often than not, he handles what I know is a very frustrating situation with a lot of good humor and grace. He's crafted ways of stringing memorized text from his favorite shows and movies together to get his point across, usually humorously. For example, A recent game of "dentist" ended with him examining my teeth and saying "the tooth, the whole tooth, and nothing but the tooth!"

Seriously, Silas is just that awesome.

When I'm feeling up against it on a run, I’ll often think about how hard Silas works to navigate a world that isn't very friendly to his neurology, and that helps me push myself to get uncomfortable—and then to get through it. This, in turn, seems to help me sling off some of the stress that comes with being a mom to a boy in a world that isn't always so kind or accommodating to kids like him. 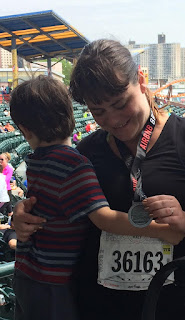 When race day finally arrived and I got to the starting area of the half, I felt awkward and nervous. I was doubting myself for signing up for such a long distance, and worried about finishing. I sat down on the curb in my starting corral and started chatting with a young man and his father, who were sitting next to me. It was clear after a few exchanges that the young man, an avid runner, was Autistic. He had attended schools in Manhattan that we were considering for Sy, and he and his father told me about them and gave me some pointers for the run. They told me about the many races they had run together, and about their future plans to run a marathon. I thought about them a lot as I ran the long alphabet stretch of Ocean Parkway toward Coney Island.

I also thought about Silas--how he had somehow overcome our short-legged body type, how he is so joyful when he is running, how easy the wide strides seem to come to him. I thought about how years down the road, if I can continue the training, I may be able to keep up with him on the races we will run together.


Silas looked great wearing the medal I got for finishing that day. 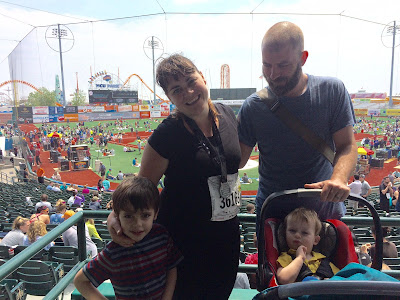