Last week, my iMac crashed. I took it to the Apple Store, to the young people in blue tee shirts designated “geniuses” who are charged with helping the technologically dismayed and uncertain. My genius informed me that my hard drive was too old and could not be resuscitated. A new hard drive was installed and I spent yesterday transferring data to my blank, but apparently fresh and capable new hard drive. A process that entailed several hours on the phone saying “what? what?” to various disembodied voices.  My hearing is not what it used to be.  Nor are phone connections. The more complex the system, the more liable some part of it is to fray, sputter, misalign, conk out.  Computers are like rigid brains, prone to strokes.  I tell myself that I should go back to a legal pad, and leave behind this all-too-fallible, profit-driven, bound-to-crash machine.  But even if I wrote everything out longhand, I’d have to type it into a computer to get anyone to read it.

After much effort, I have recovered a great deal, although everything from the past six months is gone, and I find myself in a time warp.  Instead of the proposal I was working on, smack in the middle of my desktop appear words that I wrote about Felix two years ago, when we were deep in the misery the electrical mayhem in his brain can cause him:

We strap on his mitts, so his fisted hands will not bloody his still soft skin.  His face is not yet whiskered, on the cusp, beautiful, even with his self-slapped eyes, his nose as swollen as a boxer’s, his ears scabbed and rusty.  The mitts just came, not the oven mitts fastened with clothesline we’d been using, but medically approved, thirty five dollar, double security Posey mitts used at the finest hospitals for patients who yank at the tubes and IVs, determined to get off their beds and walk, crawl, roll away from the infernal blinking and beeping and record keeping.  Mitts that are allowed on the school bus, that pass muster with the Child Service agents with their thin lips and badges and impossible jobs.

I met a boy who was once like Felix, who moved through the world with no words, no language, who bashed his own head until it bruised and bled. At seven he learned to speak.  Now he no longer hits himself, only says, I want to die.

Words that bring me back to the time when Jason and I realized that love was not enough, that helping Felix required more energy, more people, more space, more opportunity for renewal than we could muster.

Right after my computer crashed, I left the broken machine on my desk, packed the girls in the van and drove up to visit Felix at his program in New Hampshire. His school abuts a pine tree lined lake, with a sandy beach made wheelchair accessible by ramps that go right down to the shore. The life guard looked after my daughters so that I could help Felix from his chair. He is so big now, more than 120 pounds. We wobbled, laughing at his weight, and stumbled into the water. The lake bottom was mucky and oozed through our toes.  He yelled, outraged at the cold, then calmed down.  The water held him up; he only needed my hands to steady himself against the uneven bottom. His eyes shimmered.  I spun him around and his laughter rippled over the lake. 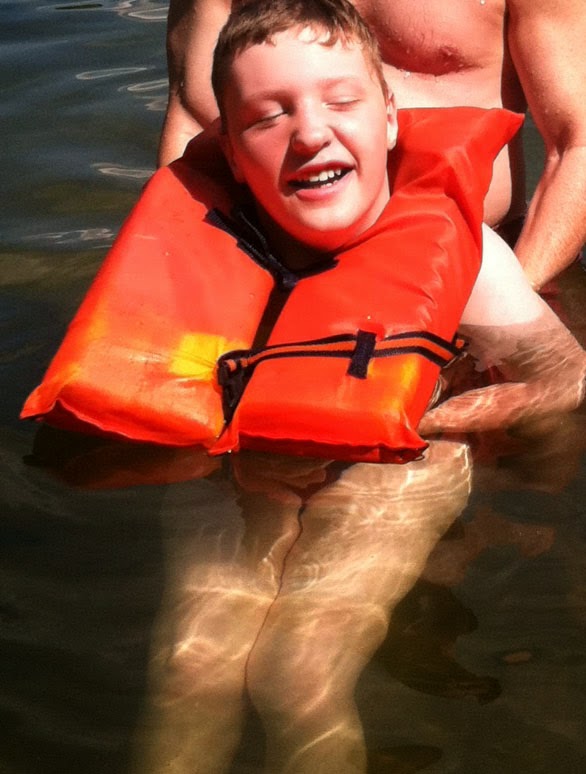 I think about this now, back home, trying to install photoshop.  Without Felix here, I feel diminished, fretting about deadlines that don’t really matter, yelling at the girls for crushing crackers on the floor. How lovely to have patterns of memory that can dilute the power of my desk, allowing me to glimpse his splashed face, his yellowish teeth, his enormous smile, the game way he ducked down to lap up water whenever my attention slipped. 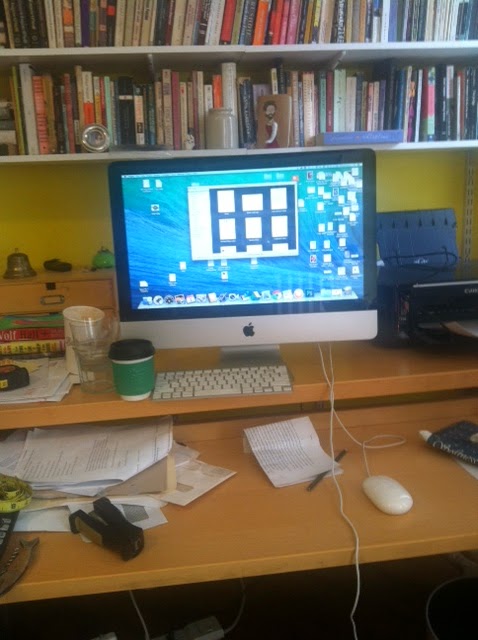